Had a tough and busy day today? Managed to perform only compulsory prayer? Did not get time to touch the Quran, recite few supplications or perform optional prayers? Conquered the world? Now what? Very tired and going to sleep asap without remembering Allah? Please don’t do that!

This post contains few good things you can do daily at night just before sleeping to remember Allah SWT and to earn great rewards from Him insha Allah. Doing these good, short yet powerful deeds won’t take much time and once it becomes an habit you will love doing it insha Allah. Remember, these are the Sunnah of our beloved Prophet (ﷺ)! 🙂

Preparations Before Going to Bed

Abu Mas’ud Al-Badri (May Allah be pleased with him) reported: I heard the Prophet (ﷺ) saying, “He who recites the two Ayat at the end of Surat Al-Baqarah at night, they will suffice him.” [Al- Bukhari and Muslim]

Narrated An-Nu’man bin Bashir: that the Prophet (ﷺ) said: “Indeed Allah wrote in a book two thousand years before He created the heavens and the earth, and He sent down two Ayat from it to end Surat Al-Baqarah with. If they are recited for three nights in a home, no Shaitan shall come near it.” [Tirmidhi]

The Prophet (ﷺ) said, “There is a surah in the Quran which is only thirty verses. It defended whoevere recited it , until it puts him into paradise” i.e., Surah al Mulk [Fath al Qadir 5/257, Sahihul Jamiea 1/680, Tabrani inAl-Awsat & Ibn Mardawaith]

Jabir (radiAllahu anhu) said it was the custom of the Holy Prophet (ﷺ) not to go to sleep until he had read Tabarakalladhi Biyadihil Mulk and Alif Laam Meem Tanzeel. [Ahmad, Tirmidhi and Darami]

Anas (radiAllahu anhu) reported Rasulullah (ﷺ) as saying, “There is a Surah which will plead for its reciter till it causes him to enter paradise” (Tabarakalladhi Biyadihil Mulk). [Tabrani]

It was narrated that Nawfal al-Ashja’i (may Allaah be pleased with him) said: The Messenger of Allaah (ﷺ) said to me: “Recite Qul yaa ayyuha’l-kaafiroon then go to sleep at the end of it, for it is a disavowal of shirk.” [Abu Dawood and al-Tirmidhi]

It was narrated from Aa’ishah (may Allaah be pleased with her) that when the Prophet (ﷺ) went to bed every night, he would hold his hands together and blow into them, and recite into them Qul Huwa Allaahu Ahad, Qul a’oodhu bi rabb il-falaq and Qul a’oodhu bi rabb il-naas. Then he would wipe them over whatever he could of his body, starting with his head and face and the front of his body, and he would do that three times. [Bukhari]

It was narrated that ‘Aa’ishah (may Allaah be pleased with her) said: “The Prophet (ﷺ) would not go to sleep until he had recited Bani Israa’eel (Soorat al-Isra’) and al-Zumar.” [al-Tirmidhi]

Having Intention to Pray Tahajjud

Abu Hurraira (RA) reports that the Messenger of Allah (ﷺ) was asked, “What prayer is most virtuous, after the obligatory prayers?” He said, “Prayer in the depths of the night.” [Muslim, Abu Dawud, Tirmidhi, Nisaa’i, Ibn Majah]

Always sleep with the intention of getting up for Tahajjud and Fajr. We should try and pray Tahajjud every night as it is one of the best and most rewarding Nafil prayers one can possible pray and makes it possible for a person to gain the top ranks of the Jannah. If we can’t pray everyday, then we should at least pray as much as we can.

Narrated Al-Mughira: The Prophet used to stand (in the prayer) or pray till both his feet or legs swelled. He was asked why (he offered such an unbearable prayer) and he said, “should I not be a thankful slave.” [Bukhari]

Rasulallah (ﷺ), to whom the Jannat-ul-Firdouse is guaranteed, prayed Tajajjud with long rak’ahs which caused swelling of his blessed feet. Whilst reciting Quran in Salah, Rasulallah (ﷺ) used to cry excessively and this caused a wheezing sound coming from his blessed chest as if a pot was being boiled. This is due to the fear Rasulallah (ﷺ) had of Almighty Allah. And what’s your reason for missing Tahajjud?

It is recommended to start the night prayer with two short rak’ahs, because of the hadith:

Abu Hurraira (RA) reported that the Prophet Muhammad (ﷺ) said, “If you get up for night prayer, start with two short rak’ahs.” [Muslim, Ahmad, Abu Dawud]

Note: Tahajjud is minimum 2 rak’ahs. You can pray up to 12 rak’ahs. This is Sunnah. However there is no limit for voluntary prayers (Nafil). One may also do a lot of Dhikr as well as recitation of the Quran. 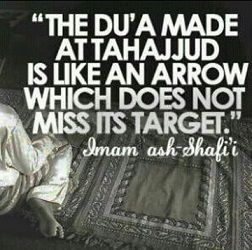 The duas at the time of Tahajjud are very readily accepted by Almighty Allah and one should cry and repent to Allah during this time. If one cannot cry due to the hardness of ones heart due major sins then one should at least make a face as if one is crying. Just as a mother tends to her baby quickly and promptly when it cries then in the same way Allah tends to his servant quicker when his servant is crying and sincere.

More Hadiths about the Night Prayer:

Jabir (May Allah be pleased with him) reported: The Messenger of Allah (ﷺ) was asked: “Which Salat is the best?” He replied, ” The best Salat is that in which Qiyam (the duration of standing) is longer.” [Muslim]

Narrated Hudhaifa:
When the Prophet (ﷺ) (p.b.u.h) got up at night (for the night prayer), he used to clean his mouth. [Bukhari]

Narrated Masruq: I asked `Aisha “What deed was the most beloved to the Prophet?” She said, “The regular constant one.” I said, “At what time did he use to get up at night (for the Tahajjud night prayer)?’ She said, “He used to get up on hearing (the crowing of) the cock (the last third of the night). [Bukhari]

The Prophet (ﷺ) performed the night prayer in pairs (i.e., Rak’ah) and made it odd number by observing one Rak’ah (as Witr). [Bukhari and Muslim]

Narrated Nafi`: Ibn `Umar said, “While the Prophet (ﷺ) was on the pulpit, a man asked him how to offer the night prayers. He replied, ‘Pray two rak`at at a time and then two and then two and so on, and if you are afraid of the dawn (the approach of the time of the Fajr prayer) pray one rak`a and that will be the witr for all the rak`at which you have offered.” Ibn `Umar said, “The last rak`at of the night prayer should be odd, for the Prophet (ﷺ) ordered it to be so. [Bukhari]

‘Aishah (May Allah be pleased with her) reported: If the Messenger of Allah (ﷺ) missed his night (Tahajjud) Salat because of indisposition or the like, he would perform twelve Rak’ah during the day. [Muslim]

Abu Salamah bin ‘Abdur-Rahman narrated that Abu Hurairah said: “I heard the Messenger of Allah say concerning Ramadan: ‘Whoeve spends its nights in prayer (Qiyam) out of faith and in the hope of reward, he will be forgiven his previous sins.” [Darussalam, Sahih]

These are final few short supplications (almost everyone of us knows these) you can recite when you are on your bed finally. All these are to be recited at least 100 times at any time during a day. You should try to recite during the day whenever you get ‘free time’ and finish the remaining at night.

We should make the habit of utilizing maximum the little time before sleeping in the remembrance of Allah as sleep is a form of death. When a person sleeps, his soul is taken.

Allah takes the souls at the time of their death, and those that do not die [He takes] during their sleep. Then He keeps those for which He has decreed death and releases the others for a specified term. Indeed in that are signs for a people who give thought. [Quran 39:42]

And it is He who takes your souls by night and knows what you have committed by day. Then He revives you therein that a specified term may be fulfilled. Then to Him will be your return; then He will inform you about what you used to do. [Quran 6:60]

On the authority of Ibn ‘Umar, radiyallahu ‘anhuma, who said: The Messenger of Allah (ﷺ) took me by the shoulder and said: “Be in this world as though you were a stranger or a traveler/wayfarer.” Ibn ‘Umar used to say: “When evening comes, do not expect (to live till) morning, and when morning comes, do not expect (to live till) evening. Take from your health (a preparation) for your illness, and from your life for your death.” [Bukhari]

May Allah help us to do these good deeds consistently and give us the ability to wake up regularly for Tahajjud and act upon the Sunnah of our Prophet Muhammad (ﷺ). Ameen!